I’m one of those who cannot really understand a thing if he doesn’t represent it in a graphical way. For CQRS+ES it’s the same and probably it’s even more important. Why? Because CQRS+ES architecture is all but simple; it could be made of a lot of complex components…and I want/need to remember the details and what happened in this training journey between 6 or 12 months (verba volant, scripta manent).


An important premise: the following it’s NOT a tentative to depict CQRS+ES Architecture’s components and their relations, but it’s only the graphical representation of what I’ve understood after some months of studies. That’s not good for every CQRS+ES scenario, but I think that most of the components drawn are present in most of the cases. I’m continuously deepening these concepts, and I will have made some error for sure, so please, feel free to correct me (and let me grow).

I tried to draw a super-set of components that could be used in a generic CQRS+ES architecture. Some of these components could be used or not to introduce different functionalities and behaviours, like queues for async flows. 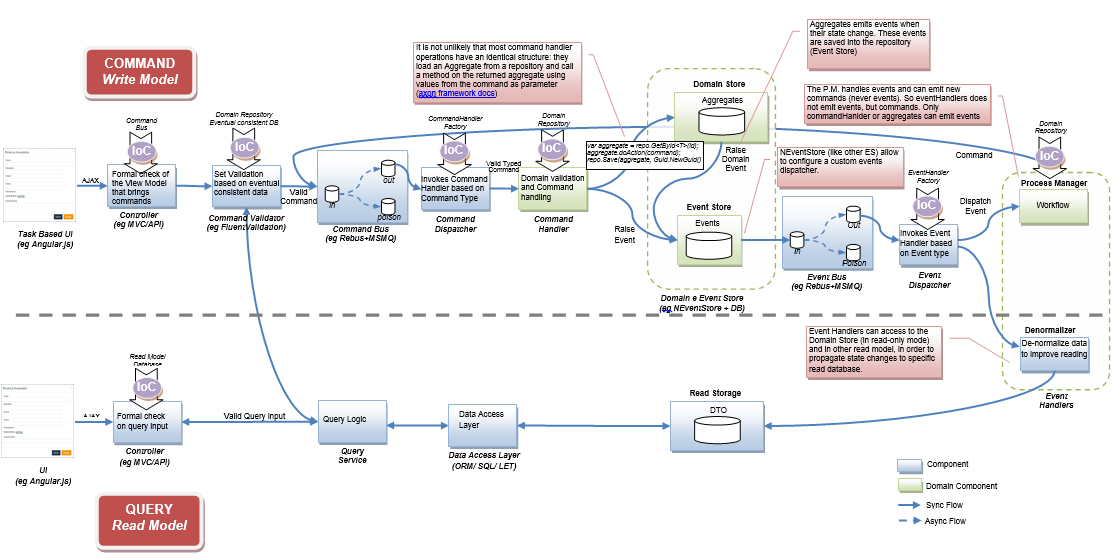 Some explanation: there’s a COMMAND part and a QUERY part, as CQRS has stated and, it’s pretty evident, the Command part is the most complex. That’s cause we’re dealing with commands and events, their buses, their validations, their handlers, their repositories, in sync and async manner. For that, I will mainly focus onto the “write-model side”.

I wanted to stress the importance of Inversion of Control and Dependency Injection (DI) showing in the scheme where DI was involved: it’s easy to see that is…everywhere. I’ve used Castle Windsor container and since I’ve never used it before, I wrote an article that describes my first steps and the technical and design errors I’ve faced.

Anyway, describing what depicted in the write-model, here are the main steps:

Keep simple at first. My goal is to implement a very simple application that realizes the main components of a CQRS+ES architecture, in order to making practice, better understanding and exploiting its power in Discitur project. In fact, in that project’s product backlog there are some important stories that are involved with “event-driven behaviours” and so I wanted to explore if CQRS+ES architecture could fit with my needs.

But Discitur’s infrastructure scenario is very simple (it’s a web application hosted in a cheap web hosting provider) and I want to keep it simple (for now); furthermore, my actual budget for project maintenance and evolution is very limited and that’s why I want to simplify the overall design and eliminate some components.So I made the following decisions: