Let’s look at the solution build log: there’s a warning:

If you follow the link in the warning you can read a very detailed description of the issues of using sync and async NeventStore event dispatcher. In summary, there could be a problem in the order in which events (in very rapid sequence) are dispatched.

To do that, in the next version 6 of NEventStore, we will be able to use an improved EventStoreClient; in the meanwhile another solution could be used: PollingClient.

With this solution there is a real separation between command stack and query stack(s), because the read model is setup as a client for consuming events for its own purposes; this means that the read model stores the checkpoint of the last event consumed and periodically check the Event store for new events. When this occurs the PollingClient starts a process to consume the new events and store the checkpoint number of the new last event consumed. each projections should be set-up as a polling client that reads and consumes the events.

That has been explained by Damian Hickey in the comments of the same issue. Here it is: 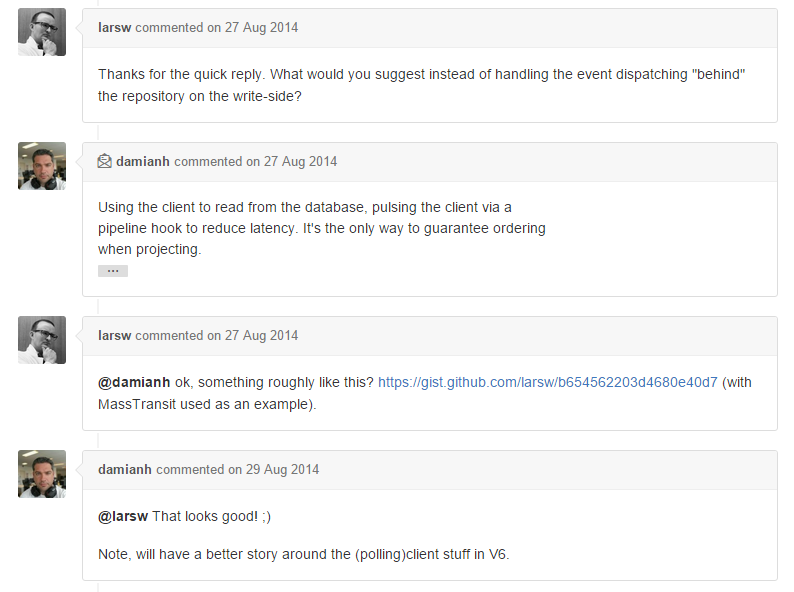 In the same answers Lars Wilhelmsen shows a pretty complete and absolutely understandable example about the concept expressed by Damian, so to sum up:

The problem is that StoreEvents has to know the PipelineHooks, which starts a cycle of polling of the PollingClient, which in turn depends on the StoreEvents, creating the most classic circular dependency. From my point of view, however, the design is correct, but we must to tell Castle.Windsor not immediately resolve the dependencies of the IObserveCommits when resolve the IStoreEvents, but to wait for the time of the actual use. To do this, I followed these steps (but it’s not the only way):

Anyway, Damian has already announced some news about this topic, so…I’m waiting for NEventStore version 6