In the previous article, I was asking myself «how does NEventStore work with legacy systems?». Here again I’m asking myself which kind of strategies could I implement to migrate data from Legacy System (n-tier) to CQRS+ES?

From the data-layer perspective, here is the scenario I’m talking about: 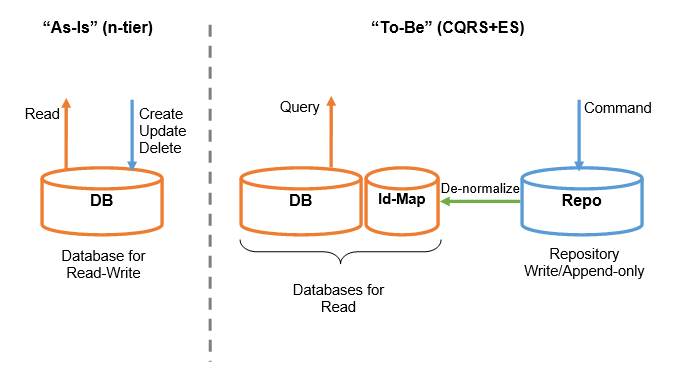 Despite all the variants that anyone could think, I can see two kind of approaches:

Let’s dive into the second option.

This approach is realized by this logic:

What I like in this approach is that I kept completely separated the domain from the migration logic. Nothing about the migration is present in the Domain or Command/Query stacks. That’s the point in my opinion: the migration is the beginning of all of your existent ARs, but it’s not relevant in terms of business-domain, it’s more like a technical step, so this kind of code should not pollute the business code (wait, I’m not saying that migrations do not involve some domain expert’s decisions, but these are decisions that generally do not impact on the normal life of the ARs after the migrations).

Migration are very complex projects, often realized by specific teams, sometimes different from business dev teams. In my experience I worked in dev team on some very complex domains, while some different teams were working on a migration project on the same production environments (think about a multi-tenant environment with a roll-out plan for different “go-live”). I didn’t know their logic; they didn’t know mine; but the database structure and its rules were in common in the same time. Keep the code separated was a must. Again, these are my thoughts and my solution; I’m not sure is the best and I’m open to learn from your experience and ideas.

If you are interested, all the code is present in the repository under a specific project (Todo.Legacy.Migration), but DI’s container specific installer and migration invocation, but just for the sake of this training journey. All the code about migration is visible in this commit.

Recently I’ve reviewed the last part of the migration strategy, cause I wanted to make some practices about Events-Replaying. Actually doing some experimentation about replaying the committed events (necessary for example to recreate a projection) allowed me to figure out an important error in this strategy: the migration event should be able to be listened (and rebuilt) by the read-model event-handlers.

That’s why if we didn’t have an event-handler for that external events, the projection was not able to be correctly rebuilt, because it couldn’t re-create the migrated entities and, afterwards, the next committed events could not be correctly handled. So the migration logic was be modified in two points:

here the code for the reviewed migration strategy.

The last update introduced something that could be considered an “open point”. The migration event should carry a complete state of the AggregateRoots from previous system. To do that I consider reasonable to use a Memento as the event’s single property. This kind of event could be named to give a full meaning of the Migration process (i.e. MigratedToDoListeEvent) or with a more general name, that could be used also for maintenance purposes. For example to introduce some data-fix (cause bugs or whatever) in the events sequence. This is something like a “return to CRUD logic”, using events without a specific domain meaning, but…it’s convenient, and easy, and just for devops team.